For Maximum control of your background image:

It is best to insert the background image into a photo editor for 2 advantages: In order to get a quick "cut out" of your model, you will need what is called an "Alpha Mask". The Alpha Mask rendering preset is found in the "Advanced" group of render settings. Refer to the Alpha Mask section of the User Manual.

The key with Alpha Masks is to render them as large as possible but with the exact same aspect ratio as the original rendering, then to down-size the mask image to match the rendered image. For example, if the original rendering is made with an aspect ratio of 4:3(standard) or 16:9(widescreen), render the alpha mask with the same aspect ratio of 4:3 or 16:9. This is automatic if the "Fit to View Proportions" radio button is checked in the Resolution Section of the Render Tab in the Render Dialog Window.

The steps are very similar to the demonstration in the Tips and Tricks' Photomatch - Aligning a Rendering with the Original Image tutorial here.
The larger the mask rendering, the higher the quality the anit-aliasing of the masked image will be. 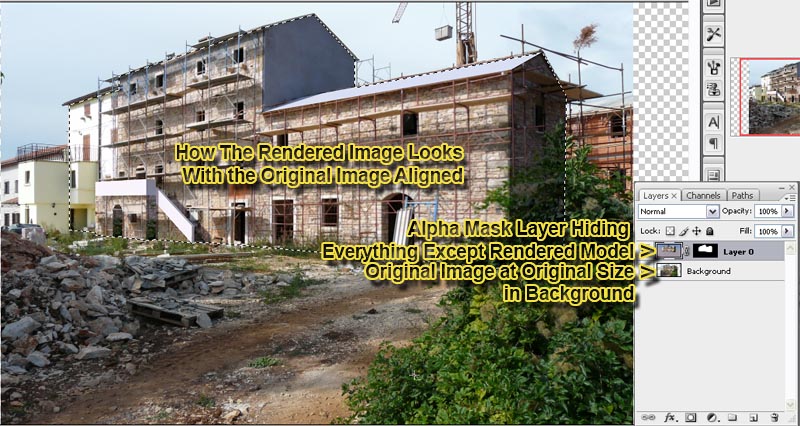 do you have this video tuttorial?

Subject: How to use the Alpha Mask / Alpha Channel


Fletch wrote: ↑
Thu Jan 24, 2019 12:17 pm
If you want to put in a different sky background, or want to place only a single selected item you have rendered into another image, you need to render an Alpha Mask.

Render the Alpha Mask at twice the resolution you will need in your final image and resize the mask in your image editing program. This increases the quality of your alpha mask image.
Then place that Alpha Mask rendering onto the Alpha Channel for your rendered image's layer.

In GIMP this video tutorial explains how to copy and paste your black and white image into the alpha mask channel for your rendered image layer (these are the steps for GIMP as shown in the video tutorial linked here): NOTE: If you are in Photoshop, and you create a mask on your rendered image layer, you can hold ALT key down and click the mask icon on the layer to open up that alpha channel for editing, then paste in your mask there. Click on the image icon thumbnail for the same layer to get out of alpha channel editing mode.

Return to “Tutorials, Tips, and Tricks”

Users browsing this forum: No registered users and 1 guest