Tutorial 7 in the Basics of Twilight Render V2 Series

The animation editor is very similar to the standard Render Editor.  From it you can set the Render Preset, the Image Size, various Camera properties, and Layer visibility.  You can find a tutorial on all these under the Basics of Rendering Tutorial here.  Almost all the settings are exactly same and used the same way.  There is the addition, however, of three (3) specific controls that you will need to use for setting up your animation.

The first is the Animation Advanced Settings.  You can see this in the Animation Editor under the Advanced drop down (right in the middle of the editor's Toolbar).  Under the dropdown you will find all the controls necessary for setting up your animation, including the length of time to run, the number of frames per second (FPS) and where to save the finished images. 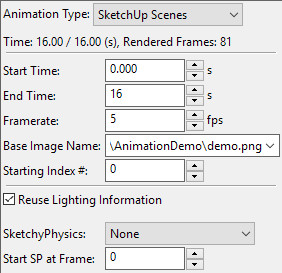 Once you have your animation set, you can choose to preview what your final animation will look like.  Twilight Render V2 provides two tools to help you visualize your animation before commiting to a long render.

The other tool is the Animation Preview.  Pressing the preview button (the film strip and play button in the Toolbar) will position the SketchUp view along each render point in the path.  A small window will open from which you can cancel the preview at any time.  When the preview is complete, the window will notify you.

When rendering an animation with Twilight Render, there are some optimization features you should pay careful attention to, and these option depend entirely on whether you are rendering animated geometry, or just the camera for a simple walk through.

There are a few important points to be aware of when rendering an animation in Twilight Render.

As you can see, animation with Twilight Render is very simple and integrates well with SketchUp's built in scene animation.  With just a few settings you can turn your SketchUp walk-through into a great video presentation.