The FastForward Denoising AddOn for PC and MAC

Available in V2.12 and beyond

One of the great features of Twilight Render is the availability of both biased and unbiased rendering methods.  Different tools for different purposes, each method has its strengths and weaknesses.  Biased methods are typically faster and produce cleaner results but impose limitations (like material emitters), can suffer from certain mathematical problems (like light-leaks), and are less physically accurate because they are based on assumptions and shortcuts.  Unbiased methods are more physically accurate and have fewer limitations or mathematical flaws, but require much more time to produce a noise free image.

If you've used Twilight Render for any length of time, you are probably familiar with the unbiased methods in the Interior and Interior+ render presets.  These produce initial images very quickly, that grainy preview of what is to come.  And in the early stages, the noise reduction moves along at a fairly quick pace.  But within a few iterations, the noise reduction slows.  That last 10% of noise reduction seems to take about 90% of the time!

This is something so inherent in unbiased rendering, affecting basically every unbiased render engine on the market, that a second piece of software has become almost as commonplace as image render, and that is the Denoiser.

Denoisers may be integrated directly into the renderer or they may be third party products that work on completed renders, but they all do the same thing: they remove unwanted render noise to produce a cleaner image.  And the advantage of using a denoiser can be invaluable.  If that last 10% of noise takes 90% of our render time, then if the denoiser can remove that last 10% of noise (or better!) for us, that could save us 90% of our render time!  Now obviously every scene is different and expecting a 90% reduction in render time is probably optimistic, but if our denoiser can cut render time in half that would be a huge improvement. 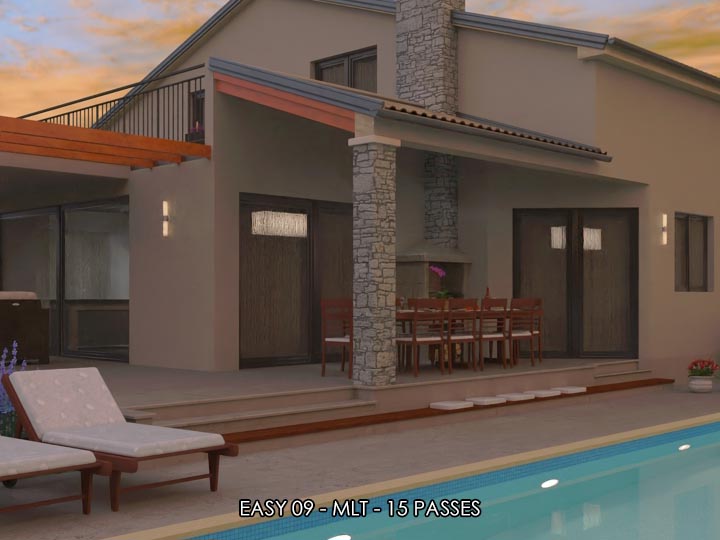 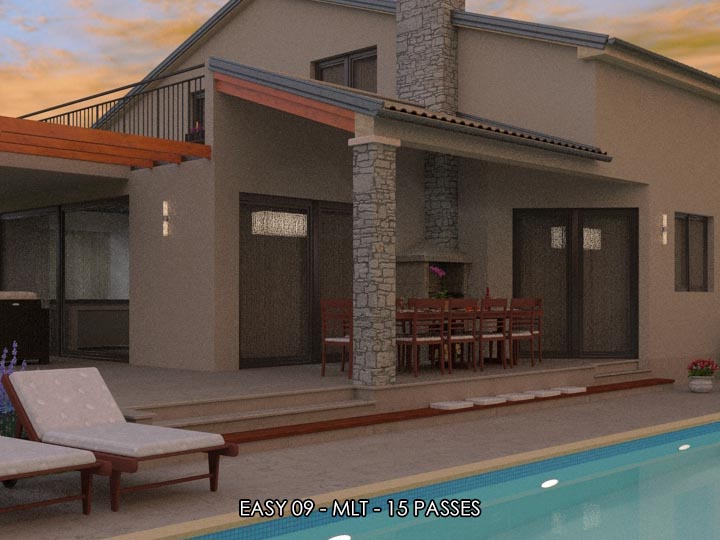 As of Twilight Render Pro 2.14.11, there are 2 variations of Denoiser that can accomodate a variety of hardware configurations one for GPU and one for CPU.

The first variation is the GPU driven denoiser (which requires compatible hardware described below).

The GPU FastForward is directly integrated into the Twilight Render Pro render pipeline and it automatically applies denoising in realtime as your image renders.  You can turn it on and off with a click of a mouse.  It's non-destructive, meaning it does not make changes to the underlying image data that can't be undone.  So you can toggle between on and off at will to see what effect it's having on your render.

FastForward runs on your graphics card GPU (more on that below) so it doesn't take CPU power away from the render engine.  It runs in all the Twilight Render rendering windows, including the primary Render window, as well as the Animation, Batch, and Exploration windows.

The second variation runs on the CPU and is based on the Intel Open Image Denoise library.

Because it runs on the CPU, and must share CPU processing power with the renderer, this variation of denoising must be run "offline".  This means you must manually capture the state of the render and initiate the denoising process manually.  Because the CPU denoiser may take significant time to run (anywhere from 2 seconds to a couple of minutes), it is important that it doesn't delay the render process.  At the same time, you may want to check on the progress of your image periodically to see how it looks with Denoising applied.  This is where the capture process comes in.

Beginning with Twilight Render Pro v2.14.11, you can capture the current state of the render into a new, separate post-processing window.  Within that window, you can make adjustments to the post-process parameters of the image (exposure, tone-mapping, etc.) without affecting the active, on-going render.

Once you have captured an image by clicking the Capture button in the Render Editor, you can also initiate the offline Denoising process.  Assuming you have a valid license for the FastForward Denoiser, you will see a button labeled Denoise Render.  By clicking it, you enable Denoising; any post-processing change you apply will include both the change and denoising.  Because this process may be time consuming, you should apply any other changes first, and the enable denoising.  If you need to apply further changes, disable denoising and then apply the other changes.

From the Capture window, you can save the results of your post-processing changes, including the denoising. 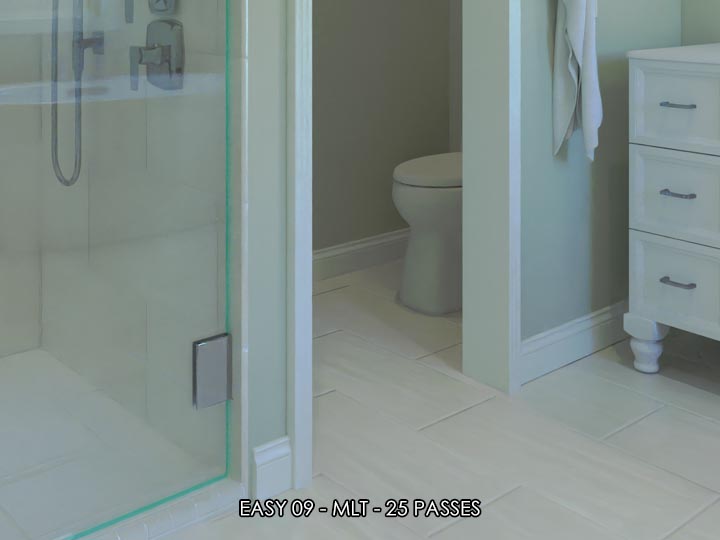 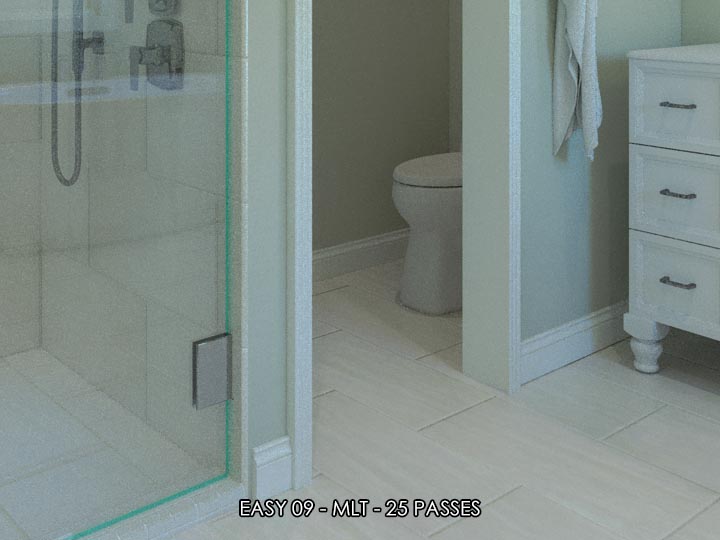 What kind of renders does FastForward work on?

FastForward works on all renders and all render methods.  That said, FastForward (like most denoisers) is really intended for use with unbiased render methods like Interior, Interior+, and Interior Preview.  This is really where FastForward shines and where you will see the most render time improvement. That said, it also works surprisingly well on "Easy 01 Prelim" render setting. 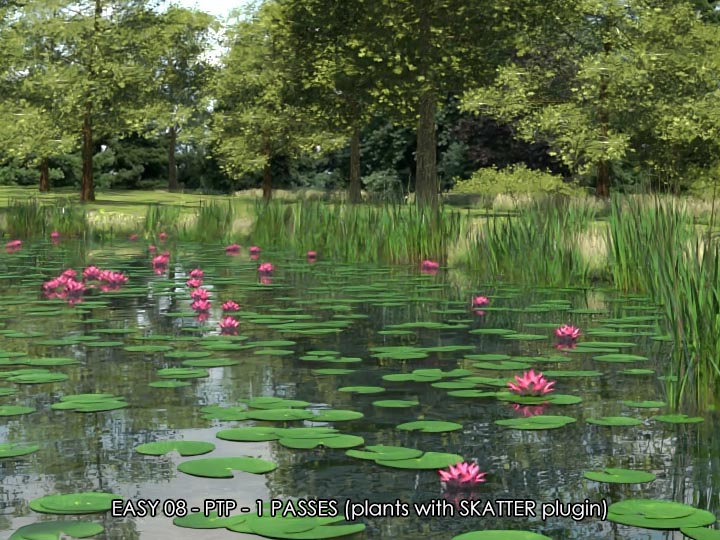 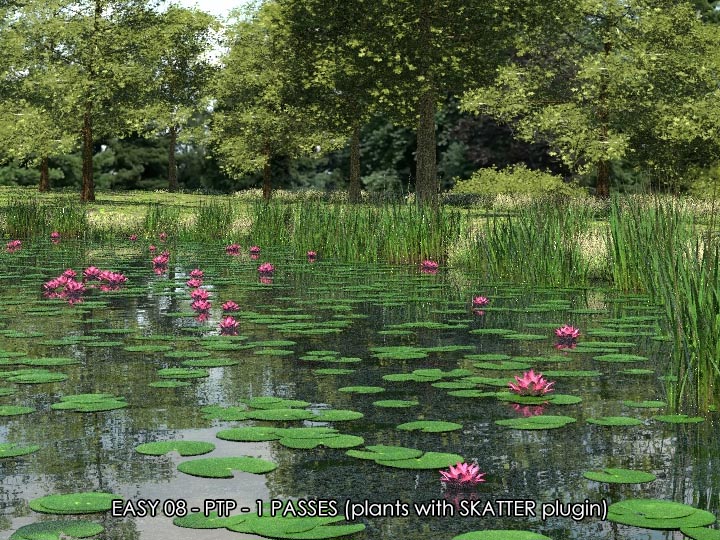 What are the requirements for FastForward?

FastForward works with MacOS and PC.

As mentioned previously, FastForward is an AddOn requiring a licensed version of Twilight Render Pro, v2.12 or beyond.  Additionally a license for FastForward must be purchased (and is available from our online store).  However, before you purchase a license you need to make sure your system is compatible.

The hardware requirements depend on what kind of variation you are intending to use.

The CPU variation can run on any hardware that supports SketchUp whether Mac or PC.  It works well on AMD CPUs on Mac. There are no specific requirements.  However, because it runs on the CPU, it is highly recommended that a minimum of 4 logical CPU cores and 8 GB of RAM be considered the minimum.  Doubling the minimum, at 8 cores and 16 GB of RAM, should be considered recommended.

Be sure to verify that your system is compatible, especially your NVidia driver version (which is easy to overlook).  Virtually all recent NVidia graphics cards can be updated to a driver version of at least 435.8.  **Please note that Twilight Render is in no way responsible for the result of updating your graphics card; do so only if you are comfortable with the task of driver updates!

How do I use FastForward?

If you are using the CPU variation, please refer to the offline post-processing discussion above.

If you are using the GPU variation, assuming you have purchased the necessary license and gone through the activation process, using FastForward is as simple as turning it on.  It's really that easy.  There are no settings or adjustments.  Just...turn it on!

From any of the main render windows (Render, Animation, Batch, Exploration) click the Settings menu and click on 'Denoise Rendering' to toggle it on or off. 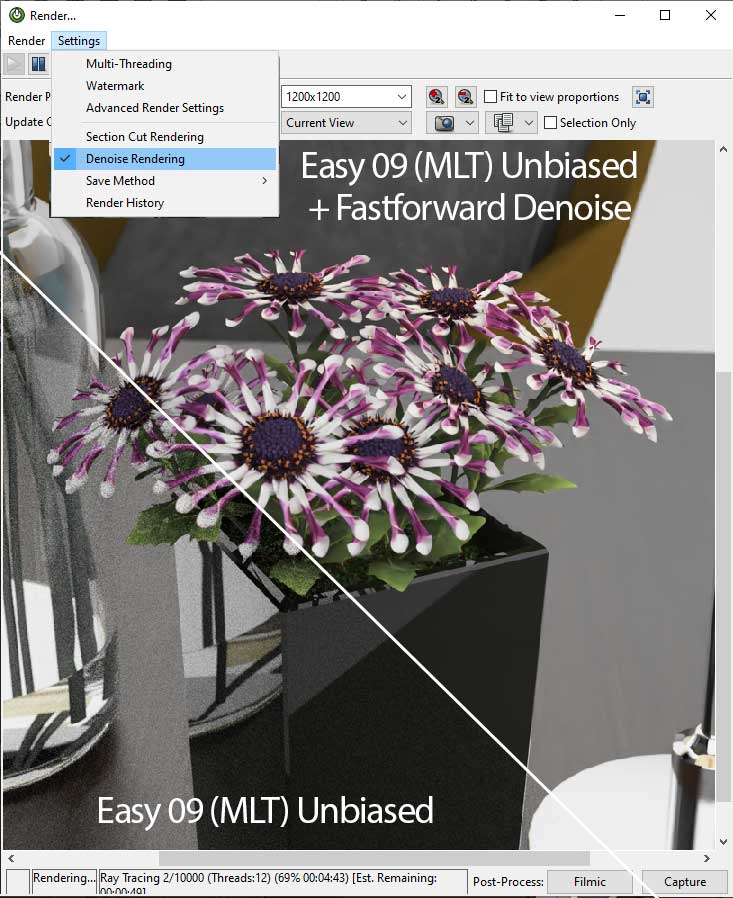 By default, Twilight Render Pro is set to automatically choose the best denoising solution.  If you have compatible hardware, this will always be the GPU variation.  If your hardware is not compatible, it will fall-back to the CPU variation.  If you wish to force a specific choice, you can do so in the Twilight Render V2 Options window.  Please note that if you choose an incompatible selection, you will not be able to use the Denoiser until you correct the choice and restart SketchUp.