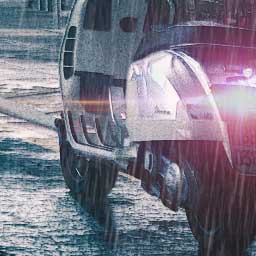 Giorgi "Cyberpunk" Melkadze in Tbilisi with SketchUp and Twilight Render

Giorgi Melkadze (age 28 from Tbilisi in the country of Georgia,) recently talked with Twilight Render about his incredible work with SketchUp and Twilight Render Plugin.

Lately Giorgi's work has been inspired by Cyberpunk and Postapocalyptic themes and much of his work is about creating an atmosphere and evoking a feeling through a single image. Melkadze employs contrast in color and light as well as contrasts in age and decay to dazzle the eye and keep the interest of the viewer. Giorgi's 3D artworks often incorporate elements from his home city of Tbilisi with his imagination to create cinematic rainy night cityscapes. 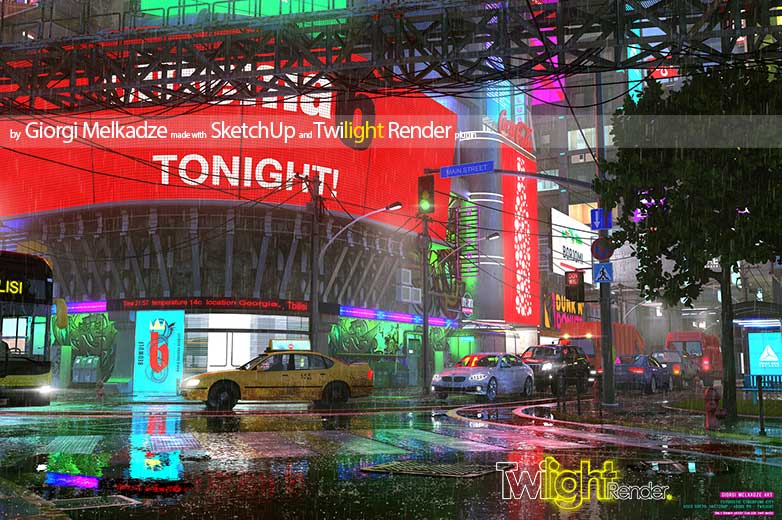 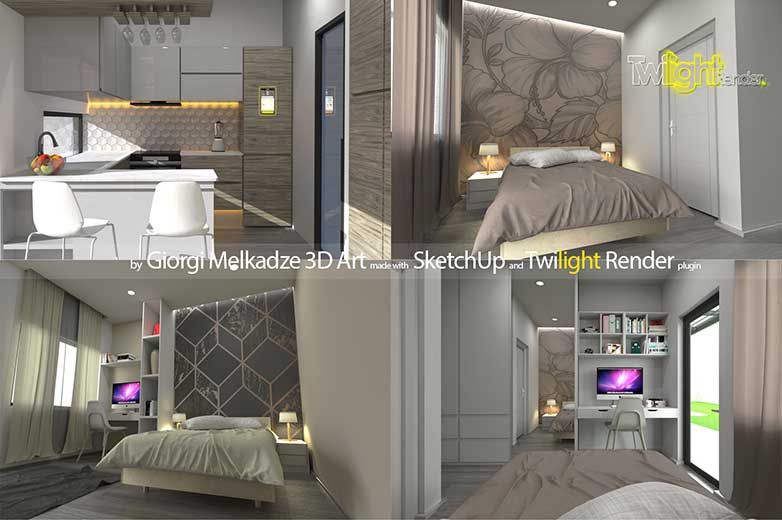 Twilight Render (TWL): Giorgi, we noticed the work you do with Twilight Render and SketchUp is quite unique and of exceptional quality. Have you been using SketchUp for long?
Giorgi: I started Sketchup using in 2007, when Sketchup version was Sketchup 6.

TWL: What made you choose to use Twilight Render Plugin for SketchUp?
Giorgi: From beginning when I started using of render system, my first choice was Twilight Render. I did not know many about render systems but, now I can say that TWL is very pretty, realistic and easy system. Thats why I use this render. 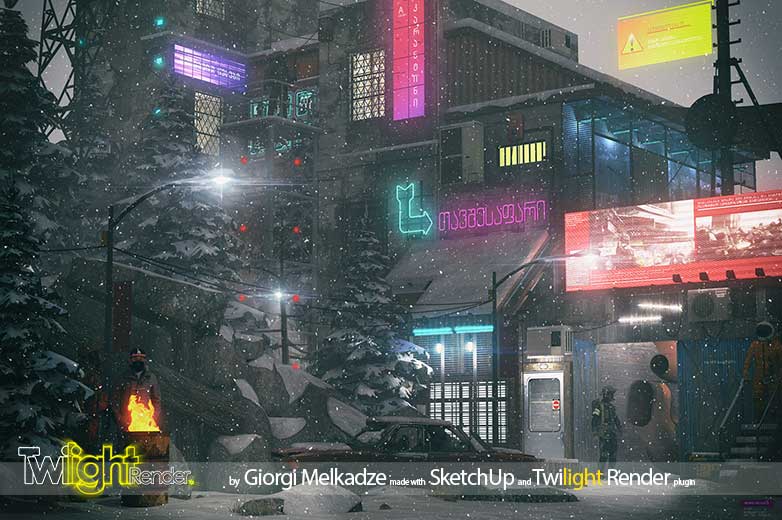 TWL: Where do you find inspiration for your artwork?
Giorgi: I love to work about Urban style and create Cinematic scenes. My most favorite is Cyberpunk and apocalyptic styles. I think inspiration is coming from movies, in real life when I walk in city and imagine re-edited streets in my mind. 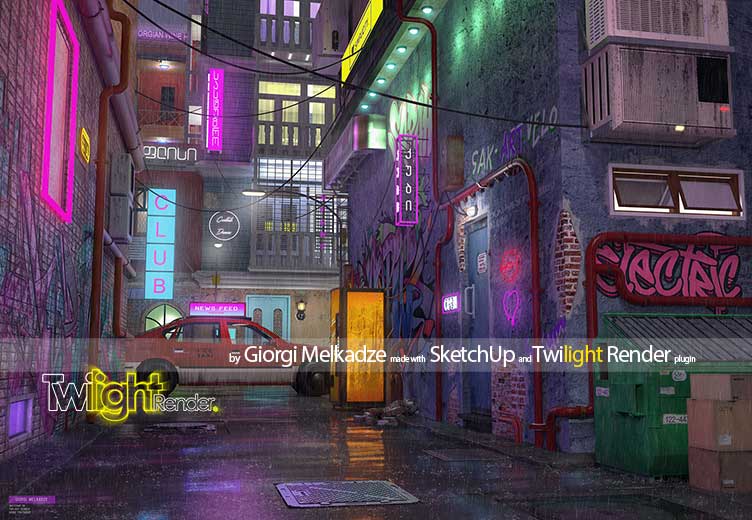 TWL: Do you do other types of artwork besides 3D?
Giorgi: Sometimes i create 2D arts too.

TWL: Where do you find inspiration for your artwork?
Giorgi: I love to work about Urban style and create Cinematic scenes. my most favorite is Cyberpunk and apocalyptic styles. I think inspiration is coming from movies, in real life when I walk in city and imagine re-edited streets in my mind. 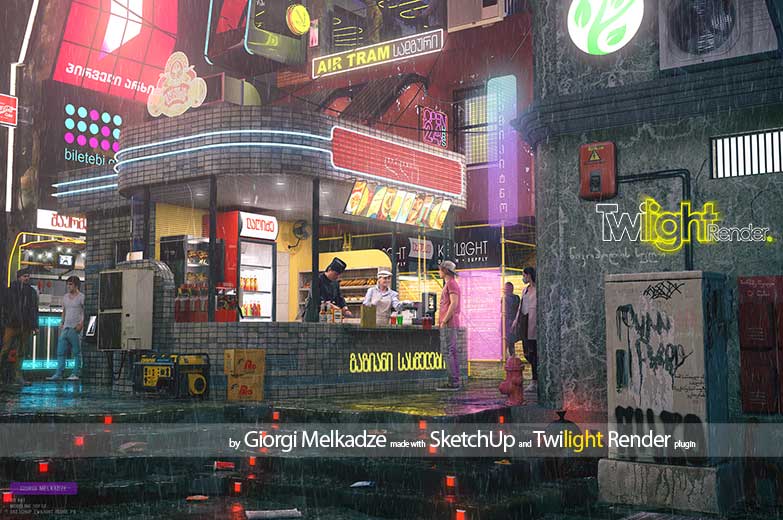 TWL: How often do you work on 3d artwork?
Giorgi: Very often, when I have free time. Its my most lovely job.

TWL: Which software do you use to create your art pieces.
Giorgi: Sketchup, Twilight render and Adobe photoshop. 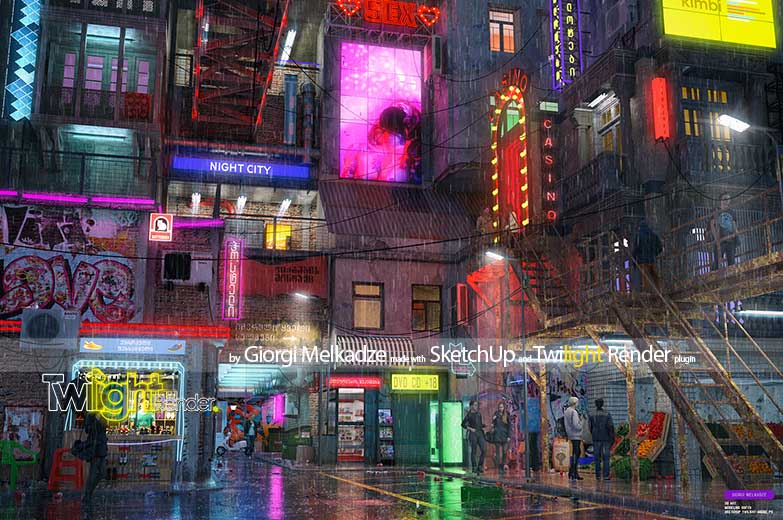 TWL: Which other artists inspire you most?
Giorgi: I do not have a distinctive Digital artist who particularly influences me. But I can say some painter artist I like, who works with oil. they are Alessandro Papetti, Zaria Forman and etc.

TWL: What advice do you have for other young artists?
Giorgi: When I was an young and beginner artist, I always felt dissatisfied with myself, because my results were not as good I wanted. I remember one great human from italy told me, dont stop! Work more and more and one day you will get what you want. I worked so many during many years and finaly I create art I like. But the limit of development never exists. Now I want to create more beautifull arts and I know, I will do.

TWL: What are some of your preferred plugins for SketchUp which you use in your workflow?
Giorgi: Twilight Render, Curviloft, Fredo plugins, ThruPaint, Soapskin, Roundcorner,Skatter, Components spray, Joint Push Pull and etc.

TWL: What are you working on at the moment?
Giorgi: at this moment I so close to finish my last work, which is urban modeling in Cyberpunk style.

If you would like to engage Giorgi for a freelance project he can be found on Twilight Render's User Forum or contacted directly via the Giorgi Melkadze 3D Art Facebook page. 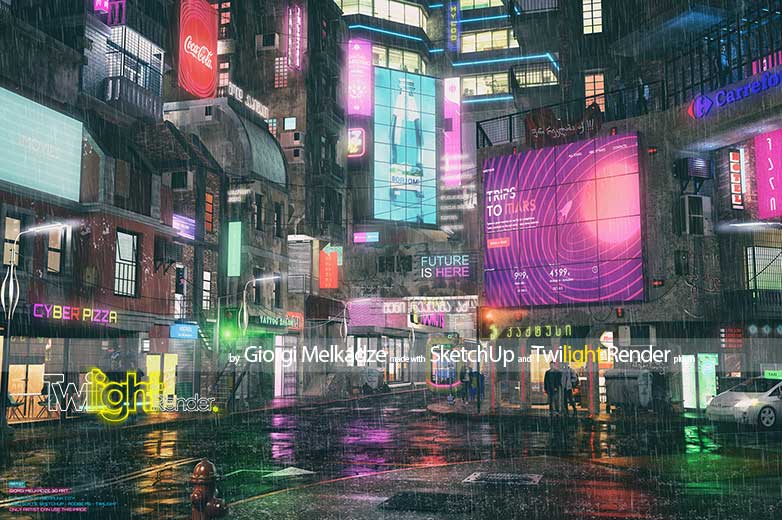